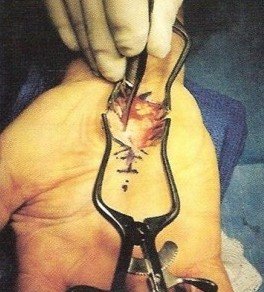 AS I stated in carpal tunnel surgery it does appear to me that in general the "older surgeons" probably favor this method more so than the Endoscopic carpal tunnel release (ECTR).

And it's not that one is better than the other, they both have their advantages and disadvantages. I believe the main reason is, it's just what they are used to doing, it's what they've learned over the years and they are probably very good at it.

Think about it, if a hand surgeon has been doing the open procedure for 20 years or so without any major problems, wouldn't you want him to do that method vs the endoscopic method if he's only been doing that procedure for a year or so? Just something to think about.

So yes, the open carpal tunnel release still has its place.

The main advantage of this method is that the surgeon can typically visualize all the important structures more easily inside the wrist. There is no working through small incisions and small endoscopic tubes with cameras.

Hand surgeons who prefer this method feel there's less chance of cutting or nicking the median nerve and feel the results are more predictable because they can tell without too much difficulty IF the "transverse carpal ligament" is completely divided or cut,which will relieve the pressure on the median nerve. See Anatomy of carpal tunnel.


Another advantage of the open carpal tunnel release method is that if your wrist needs other types of surgical repairs it can be done a lot of times through the same initial incision.


During the open carpal tunnel procedure the surgeon carefully makes a vertical incision 2-3 inches long at the wrist/carpal tunnel area (palm side up). The hand surgeon then carefully dissects and identifies important structures (other nerves, blood vessels) and then divides/cuts the transverse ligament.

After the ligament is cut, the skin is closed with sutures (stitches). The gap where the ligament was cut is left alone and eventually heals over with scar tissue. Skin sutures are removed in about 10 days after the surgery.

As with endoscopic release it's usually done under LOCAL ANESTHESIA or a regional block as an outpatient same-day sugery, and the amount of relief you get is related to what severity your carpal tunnel syndrome was prior to surgery.

The Complication rates are about the same as ECTR but with a
slight increase in incision pain, due to the one, but larger incision.

Also, it is generally expected that an open carpal tunnel release will have a little longer recovery period than ECTR. But this seems to vary depending on the motivation of the patient, what type of job he or she has, if it's a workers comp case, if there's litigation etc...

These are often more powerful predictors of Recovery than what type of procedure a patient had.

Talk with your hand surgeon and decide what's best for your individual case.

DO NOT Copy Content from this Page. Protected by

Copyscape. Plagiarism will be Detected.